Valley Of The Gods Slots 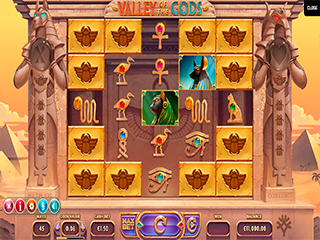 Valley Of The Gods Slots Features

Valley Of The Gods Slots Basics

Valley of the Gods is an Ancient Egyptian-themed video slot featuring some of the most famous gods from the ancient world. This Yggdrasil Gaming game was released in August 2017 and has five reels and up to 3125 ways to win. It offers a payout rate of 96.2%, re-spins, and multipliers. Read on to learn more about the game’s symbols, features, and how to play.

The game has a unique 1-3-5-3-1 reel layout and the number of ways to win varies during gameplay. Symbols on the reels include red and blue Scarabs, Hieroglyphs, Bastet, Tutankhamen, Anubis, and Horus. An epic soundtrack plays in the background as you spin the reels.

You won’t find any Wild symbol when playing Valley of the Gods, but there are 12 Scarab Blockers in the four corners of the reels, 3 in each corner. Winning combos are formed when matching symbols appear next to each other from left to right. However, the Blockers hamper your chances of winning, so you need to remove them.

During the normal mode, each winning combo gives you a re-spin. You’ll get more re-spins until when there are no more wins. Whenever you land a winning combo, the winning symbols release Golden Scarabs to destroy the Blockers. The Golden Scarabs also activate Win Multipliers and Extra Lives. They also turn into Blue or Red Scarabs to increase your winning chances. Five Blue Scarabs award 1 multiplier while Five Red Scarabs award 1 more life.

You can play Valley of the Gods on various devices including PCs, tablets, and smartphones. The “Coin Value +/-” buttons allow you to choose your coin value (0.004 to 4.00). Once you select your coin size, press the large “Spin” button to set the reels in motion or click the “Autoplay” button to automate your gameplay. There is also a “Max Bet” button if you want to place the highest bet.

Valley of the Gods is a simple online slot that gives players the opportunity to win huge prizes thanks to Win Multipliers and the Extra Lives feature.
We use cookies to ensure that we give you the best experience on our website. If you continue to use this site we will assume that you are happy with it.Ok